Sold, or not sold

Hubby's little green truck. Kinda sold. We went to have the tires changed from the truck to the mom-mobile (truck had better tires) and then we were going to clean up the truck and park it out front to sell, but the guy at the tire store bought it! (still have to transfer title so that is why I say 'kinda' sold). 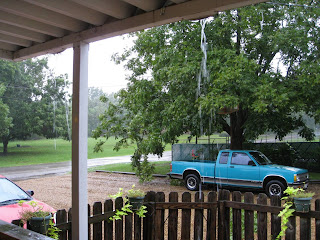 (this was a picture taken during Ike - we haven't had any rain since then, though they tell us we will have some tonight) 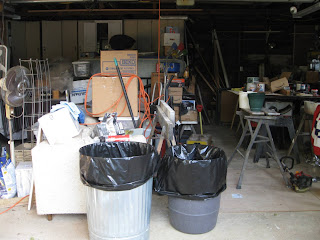 The other project for the weekend was to put some kind of order here. Stuff has just been thrown in here for the last 2 years (can't tell you when the last time an automobile saw the inside of this garage, but I would bet money it was pre-Y2K) Note, I didn't say anything about cleaning - we were just going for sorting out where stuff was! At least now I have all Brian's things together and all baby boy and his bride's things together. (I do have stuff I'm going to have to figure out what to do with - not even good enough to save for a garbage sale - the trash man used to pick just about anything I left out there but they have been most picky lately. There is still a cardboard box out there that they have passed by for the last two weeks!) Most of it the garage is a little better and I now have a (small) space to put anything I can cull out of the attic over the next couple of weekends, but it still needs a real cleaning job - and we need a storage building! 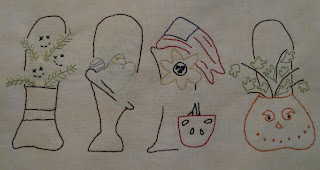 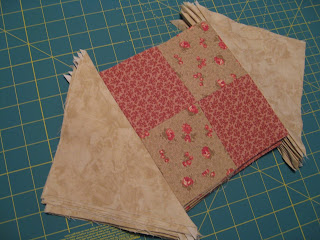 and I got some of the corner pieces sewn onto my quilt squares. I think I have 5 more to get those two sides on, then I'll go back and do the other two sides. It is so much fun! (if I just had more time!) I just hope all my squares end up the same size. I understand it can be a problem if they aren't! LOL
Saturday we went to see baby boy in a play at SFA. It is hard to believe this is his last year there. Seems like just yesterday we were going to see his first play in high school! We are really going to miss them when they head north after graduation.
Times up - if I want a post for today I better hit publish post!
Posted by TinaTx at 1:42 PM

Don't you just hate tackling projects like the garage, basement and attic. We tend to put them off forever! It's just yucky, dusty work and even when it's done you can't see that much progress!

We don't have any choice about keeping our garage clean enough to get two cars in. There is nowhere to park in this neighborhood of garden homes. And people around here just don't park in the street. So we're forced into it!
Brenda

Tina....I have a garage and extra room that needs attention. Hate to tackle them...but the room I've vowed will be in order by the end of this month.
Your quilt pieces are looking great! Hugs, Linda

Your squares look great; very professional! Can't wait to see the finished product.
I'll be you got rain last night, didn't you? Wow, we got several good, hard showers and a fantastic lightning display. It even knocked out the satellite, much to my pleasure and hubby's dismay. I love a good, quiet thunderstorm!

I'm sorry I haven't been by in so long. I can't believe all the stuff that keeps getting in my way of blogging and now I'm sick ...ugh!

It looks like you've been busy! I hate cleaning the garage, so I leave that all up to Rich LOL

To get rid of unwanted trash put a note on a six pack of beer and set it on top ;)

Good to think you got the pickup sold. Sometimes that is difficult to accomplish.

You are just buzzing right along with your quilt blocks. I really enjoy doing it too, but would rather sit on my butt and cross stitch.

Good luck with the garage. I know that is something that is hard to keep ahead of stuff stored in the garage.