I have to give it back

Hubby has to turn in his company vehicle today. You can see it in the back of this shot I took of the flowerbed back in the early summer. 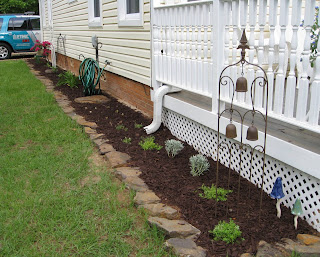 He has to give it up because he got a promotion. I know, it sounds backwards but the Expedition is basically an office on wheels. He now has an office with 4 walls instead of 4 wheels. For the last few years his job has mostly been on the road. It wasn't uncommon for him to put 300-400 miles on it in a day. He not only gave up the mobile office/billboard (they make sure you don't drive it for pleasure!) The person who will be taking his old job now gets the office/billboard on wheels. 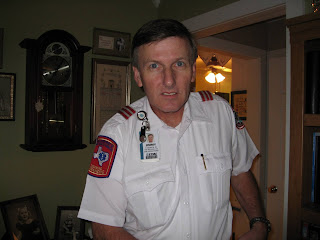 He gave up wearing a uniform. He has been wearing a uniform every day since 1983 when he went to work for the fire department. This was taken his last day in uniform. Sorry baby - it's kind of like the first day of school so I had to take a pic. This is his 'what are you doing?' look. (somewhere I have pics of his last day at the FD, but I'm too lazy to look for them) He is now a tie guy. I didn't get the 'first tie day' picture (I barely got the last uniform day) as the new job started the same week as Ike payed a visit so it was a very busy week for him.
On Saturday we got him a fresh set of wheels. (not new, but new to us) Since he was either at work or with me (in the mom-mobile) most of the time for the last few years, his old truck was barely out of the driveway. It is fine for puttering around town or hauling stuff, but not so good for the commute to work he now makes everyday. Since he still had the Expedition this week, I've been driving this 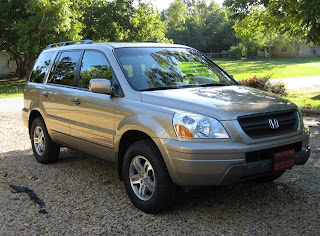 but my days are over. Tomorrow it is back to the mom-mobile. This weekend he will clean out the truck and park it in the front yard with a for sale sign. The neighbor has had his truck out front for sale the past week. Lots of people have stopped to look at it, but it is still there. The competition should be a good thing, no? Ours is much older (read cheaper) than the neighbors!
See that pile of brush in the background? There is another one like it in the front yard. That is debris from Ike. They are actually (finally) picking it up as I type.
Off to do errands, then I have my quilt class tonight. We are supposed to start actually sewing our blocks tonight so I hope to have a picture tomorrow. (if it looks terrible, I'll show a pic of something else!)
Have a great Thursday!
Posted by TinaTx at 9:28 AM

Congratulations to him! Kind of bittersweet, isn't it?
Brenda

Hey, I recognize that logo! We use East Texas for ambulance service here in town. What a small world, indeed.

Congrats on hubby's promotion! YAY HIM!

What a handome young man in uniform!!! :) I know how it is to try and keep your blog reader down to a manageable amount (and fail miserably.) I haven't checked in with you at all recently, though I was thinking about you when Ike was coming through. Glad to see you weathered the storm.