Whew - it has been a long couple of weeks! I had hoped to at least keep up with email and blogs but that didn't happen and I am way behind.
I won't try to condense the past two weeks into one long post - I'll spread it out over a few.
This past Saturday (I'm starting at the end) baby boy's bride, Ashley, graduated from SFA. (Hubby had possession of the camera so he took these pictures) 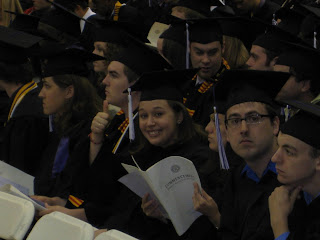 Finding one person in a sea of black robes isn't an easy task but we finally spotted her. 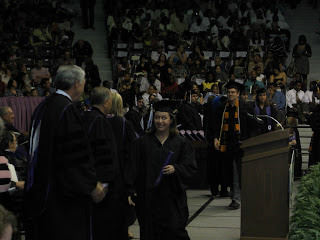 It is so hard to believe they are both out of school now. (if you are new here, baby boy graduated last May) It seems like just yesterday we were taking them over for a tour of the campus. So many things have happened over the past five years!
Most of you know that Jason (baby boy) and Ashley have spent the last 9 months in Minnesota where she was interning (as a stage manager) at The Guthrie Theater. Baby boy did not get to attend graduation as he is still in Minnesota but will start making his way back to Texas today. (he was in a play in St. Paul that did not close until last night so he couldn't come back with Ashley)
They will both be in Texas for the summer, working in Kilgore at the Texas Shakespeare Festival. It will be nice having them in Texas for a few months, even though we won't get to see them on a daily basis - it is just nice knowing they are within a reasonable driving distance after being so far away. It won't last long though as they will be heading to New York in August.
That is it for today. I have much catching up to do (both online and off!) but I hope to be back to somewhat regular posting for now anyway.
Posted by TinaTx at 10:09 AM

Congratulations! We did graduation this weekend too. Glad to see you back! Terry in Arlington

Oh, that's fun, your "kids" are into theater. My hubby teaches high school theatre, and we met when we played husband and wife onstage in a musical (I have a music degree.)

Sorry to hear your hostas died----to bad I can't send you some of mine! I call them the "hostiles" because they are getting so huge now they crowd everything else out of my flower beds.

Congrats to Ashley! What a relief to have them both out of college. You'll enjoy your summer getting to see them more often and just knowing that they are within driving distance.
Don't worry about me, I'm not hung up on comments, so when you do your blog catching up, you can put me at the end of the line.

I forgot to say..Ashley looks gorgeous..so full of life, and so happy! Terry