I once had this really cute pair of 'ladybug' scissors. 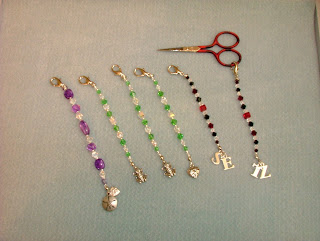 Only pic I could find of the scissors 'before'.

Yesterday I finally got around to starting to put all my stuff back in my room - this is going to be a long process. I'm a '3 day project' kinda girl - I get bored with a project if it takes longer than 3 days, but I'm getting off the subject here.

So anyway - in the process of moving stuff around, I knocked over the frame/board with (part of) my scissor collection on it and of course they all fell off. I didn't get a picture of my hands during the messy part, but let's just say when I picked up the ladybug scissors it was like picking up a piece of melted chocolate. I had red/black, sticky, slimy stuff all over my hands. I grabbed a paper towel and started wiping off my hands and the scissors. The red/black coating just kept wiping off. All of the black came off with just the paper towel and a lot of the red came off but they were still sticky. I tried to clean them up with a q-tip and some alcohol but the red just keep coming off and I started to see the silver under the coating. At this point I decided I might as well try to get it all off - I sure wasn't going to throw them away. (did I mention these are Dovo scissors - not my most expensive pair, but not the least expensive either) I left them with the handles soaking in alcohol and went back to clean up the rest of the scissors. When I started putting the others back on the board I saw this 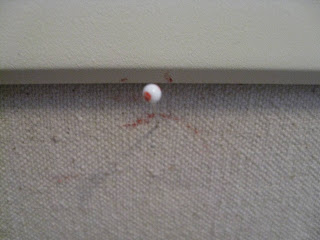 I would have been very upset if these had been in a kitted project and this was on my fabric! I tried to get it off the fabric on the board and it wasn't happening. I got it off the frame and threw the pin away. Another pair of scissors will cover what is left on the fabric. 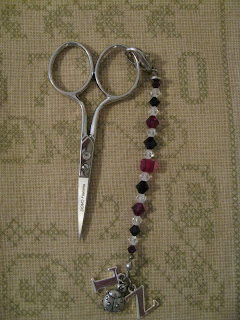 Here is what my ladybug scissors look like now. After soaking I still had to use a q-tip and a toothpick to get some of the coating off but the majority just peeled right off.

I have to say these scissors have always been in a climate controlled environment. They haven't been left in the car or out in the sun. When we moved, my scissors did not go to storage. If you have the ladybug scissors (I don't think that is the official Dovo name for them) you might want to be careful with them. I also have the 'bumble bee' ones but they have a different type of handle on them. The ladybug ones almost felt like some kind of rubber.

Don't get me wrong - I LOVE Dovo scissors, have many and will certainly by more in the future, but I will not buy any more with the 'rubber' coated handles.

Now I guess I should get back to my 'taking way longer than I would like' project. I'll check back in a few days - unless I'm buried under a pile of junk somewhere!

That is so weird!(and disappointing). :(

oh blimmy that isn't good .. I think you ought to contact them and let them know .... they are supposed to be checked for things like that happening to them .....take care love mouse xxxx

So sad for your ladybugs, at least you got them cleaned up and can still enjoy them as plain janes.

I have a pair of these in a ladybug case that I carry in my purse. I've noticed that they are starting to get little dings in them. So sad!

I have those scissors, and they did the very same thing! Very sticky and mine were kept inside also. I agree, it is very disappointing, considering that they were not cheap scissors.

I also have a pair of the Ladybug scissors and mine are doing the same thing. Very sticky and the red and black are coming off. Was really upset as I had hopes of these were perfect for a sewing set that I havent' finished yet. Thank goodness as these were to be right next to the fabric. Will see about getting them cleaned up as well. I am glad I am not the only one experiencing this, and my scissors are kept out of the elements.

Thanks for posting about this! I was considering buying these to match a needlebook/fob set and won't now!