Mercy but it is too early in the year for it to be this hot! I know it's Texas, but seriously! Frank (the weather man) says we could hit 100 today. Right now we are at 97 but we could still go up a few degrees since it is only a little after 3:00. I've been outside a bit today (painting) but I have to do it in short spurts because it is just too hot!
Our yard is crunchy. We still have some green around the edges but the middle of both the front and back are brown. :( Guess we will be watering again tonight. 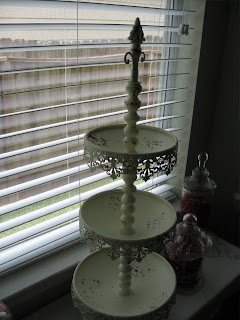 I don't have any finished projects to show today so I dug through the old pics and found some I haven't posted yet. Sorry they are dark - I'm too lazy to go downstairs and try to get better ones. 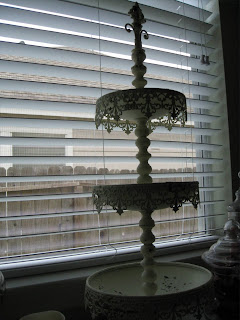 Anywho - awhile back I was in Home Goods and saw this three tier stand and knew I had to have it! They only had two and you learn pretty quick that at HG if you don't get it the first time it most likely won't be there when you go back. It is still sitting on the little table in the breakfast room - and it is still empty! I have no idea what I am going to put in it! (I have fruit in a bowl on the table) Any suggestions? I've considered bringing it upstairs to my sewing room but if I do, it won't be until after I paint in here.
And see the glass jars beside it? They had candy in them when I took the first two pics but they are empty now. 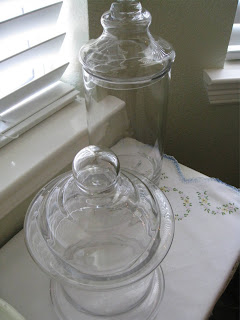 I have always kept 'seasonal' candy in them but it seems that if there is chocolate in them I can't keep my hands out of them! So - any suggestions as to what to put in those? I guess I could put candy that I don't like in them. I've been avoiding the candy aisle at the store but maybe I'll go looking for something I don't like.

Last thoughts for today - thank goodness for air-conditioning!
Posted by TinaTx at 3:07 PM

I have my smalls and biscornu's etc in my three tier stand .. makes ever such a lovely display ... and in stead of eating candy how about eye candy ....buttons :) in those little glass jars :) love mouse xxxx

i have seen people do corks, buttons, keys, ..at the lake I have a huge one full of red and white bobbers. You could do thread spools, jelly beans with an iced tea spoon..but that would get expensive and melty. old fashioned clothes pins, shells, robin eggs (fake..not candy). It is 97 here today too. I love your green paint upstairs! Terry

My thermometer reads 100 now at 5:05 p.m. (South Texas) Love your tiered stand. Hmm what to put in glass jars? How about ribbon scraps. Be sure to share what you do with the tiered stand.
Blessings,
Lorilee

The three tier stand is awesome !!!

Freakin hot is right! I miss you!!