Dining room, then and now

I'm a little late in getting this posted, but what else is new?

The hubby and I spent the 4th of July weekend painting the dining room so I thought I would show you what it looked like before. 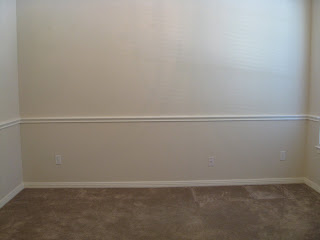 This is the room we got when we bought the house. A beige box. It did have the chair rail and crown molding. 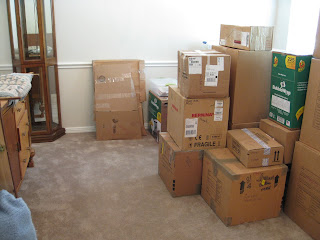 This is what it looked like when we moved in. 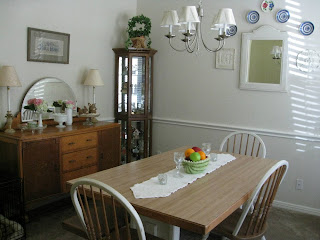 After we started getting boxes unpacked (I'm not kidding anybody - there are still boxes that haven't been opened - but none of them are in the dining room now!) 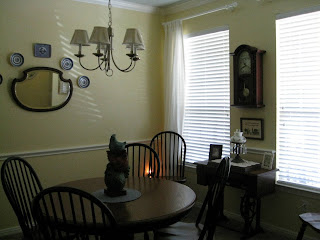 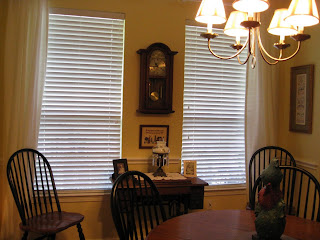 The blinds came with the house (shock) the curtains came from Ikea. I have these same curtains in several rooms, just in different colors. Can't beat 'em for the price! 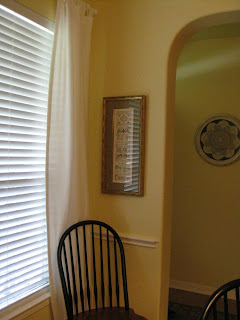 Right behind that wall is the front door. 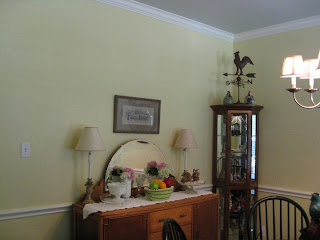 This picture shows a pretty good representation of what the colors really look like. We painted the ceiling the same blue as our bedroom. (Dockside Haze) So much better than the fugly beige.
Do you see the light switch? To the left of the buffet? 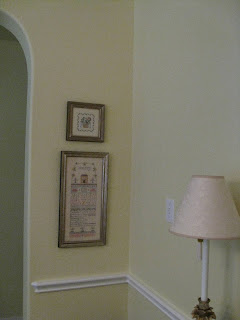 Why would you put a light switch there? Almost in the middle of the wall. Do you see how far it is from the entry? Who knows why they didn't put it on the other wall (where the pictures are hanging) or even in the box with the entry and front porch lights, which is on the back-side of the wall a couple of pictures back.

Did you notice we switched tables? We had this round table (oblong with the leaves in it) in the breakfast room. I had been thinking about swapping them just to see how they would work but I put it off until we painted. Should have done it a long time ago. I like both rooms better now! Have I shown you the dining room since we switched tables? Of course the bar stools we bought match this table since it was in there when we bought them. If I had swapped them before we bought the stools, I could have saved myself some painting. (which I haven't done yet)

Roselady asked about the towels on the stove a couple of days ago - no, I didn't make them. The flip-flops one (and the plain white one) came from Home Goods earlier in the summer and the ice cream one came from the Blue Bell Creamery.
Posted by TinaTx at 2:11 PM

I do not think you showed us the switched tables, but mentioned it. I like it better too! Terry

Tina! I love your color choices! What a pretty and welcoming dining room. I'm with you on the light switch locations. We have one of those "What were they thinking when they put that here" switches in our home and we're still stumped!

Your Silent Sampler is coming along nicely as well. One stitch at a time and you'll eventually finish!