Peanuts and popcorn and Cracker Jacks

So - we had popcorn, but not peanuts or Cracker Jacks. :)

Friday night we went to a baseball game. If you know me, you know I am not a sports fan but if I have to chose between sitting through a football game or a baseball game, I'll take baseball. 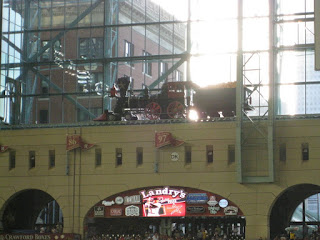 We went to Minute Maid park.
The train moves for home run hits.
Notice the glass - they had the dome closed which is good - not too hot and no skeeters! 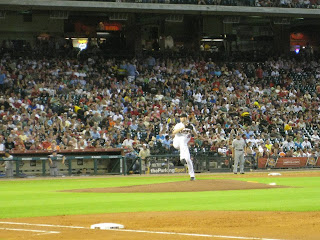 We had good seats 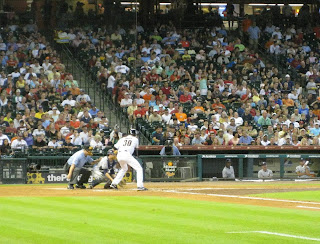 The kind where you had better keep your eye on the ball because it might come right at ya.
There was one ball that went right over our heads (okay - my head, hubby had gone for popcorn) but it was high and went way on back. 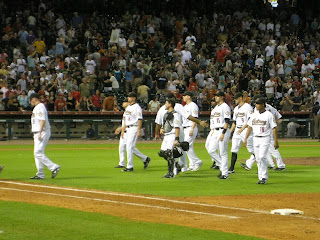 We stayed for the show after the game 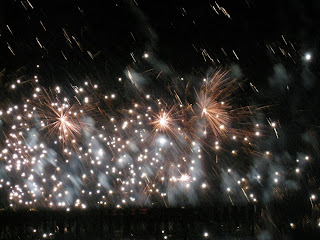 On Fridays they have a fireworks show 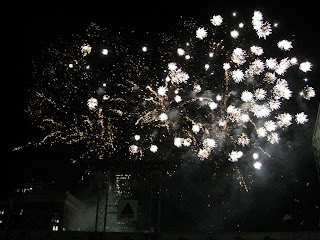 We had to wait for them to open the dome first - doesn't take as long as you might think. 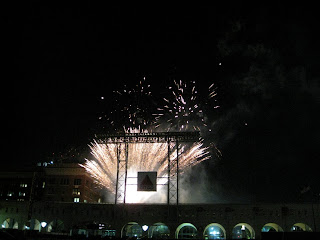 Hubby took all the pictures.

About halfway through the fireworks I thought about the fact that you can record video on the camera but I've only done it once and it was dark in there - and I can't see that close when there is good light so it took me awhile to figure out how to do it. Then, I got less than 30 seconds before my memory card was full! I made sure we had enough battery, but I didn't even think about the memory card. (I've had the same memory card in since Jan 2009) I tried to upload the shot video but I guess I didn't do something right because it ain't a'workin. Anyway - it was a tribute to The Beatles so all the music they played during the fireworks was Beatles music.

For those who asked - yes, I will show all the goodies in the give-a-way box. I took a picture before I packed it all in the box. I will take it to the hardware store tomorrow and mail it (yes, the hardware store - that is where our little mini-post office is) and as soon as Anne Marie lets me know she has received it, I'll post the pic.
Posted by TinaTx at 11:09 AM

Sounds fun. Although, I think I prefer to watch football or basketball-Probably because I've watched it as my sons played in Jr. High.
Blessings,
Lorilee

We went to a Cubs game in Chicago last year for my son's 21st birthday. He's a Mets fan and they were playing the Mets. We were so cold, here it was the end of August and the temp was only in the 60's but it was fun anyway.

What did Jimmy have to promise you to get you to go to a sporting event!!! :) Enjoy your weekend with the kiddos!