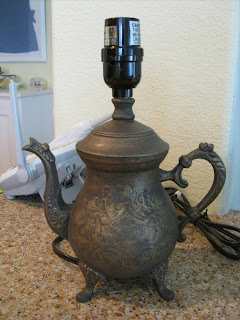 Remember my teapot lamp? It has been on my kitchen counter for years. I keep a low watt bulb in it and it stays on all the time. I threw the shade away when we moved (dumb) and had a heck of a time finding a new one for it. Who would have thought it would be so hard? I probably bought and returned at least a half-dozen or better. I can't believe I didn't take a picture of the one I finally kept. I don't even remember where I bought it, but I think gave $2.99 for it. It was white and had black piping around the top and bottom. I still wasn't happy with it, but it was the best I could find. (the original shade was more of a bell shape, but I haven't been able to find one the right size) So anyway - I decided it needed help. 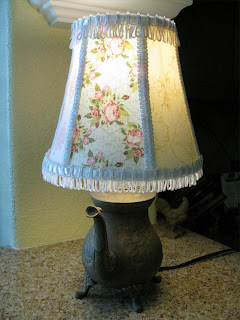 I had a set of fat quarters of 'vintage' fabric (that was just the name of the line, they were new fabrics) 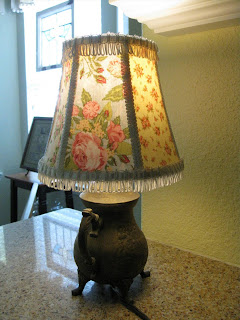 I bought several different kinds of trim - I only ended up using two so I have extra for the next project. 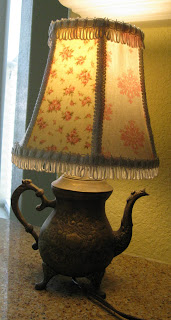 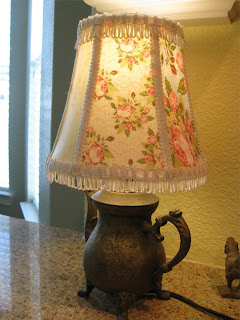 One for each section 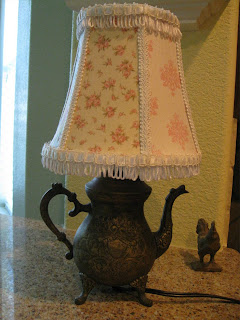 Out came the spray adhesive (I really hate using that stuff - kicks off a migraine every time, but I needed my lampshade re-vamped! I sprayed outside in the garage and tried not to breathe until I got back inside) also got out the glue gun. 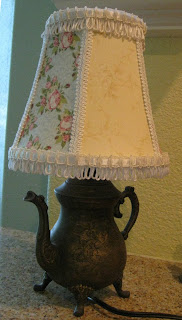 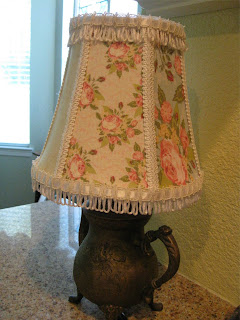 What do you think? The shade is still probably a little large for the lamp but it's so cute now, I don't care! :) This isn't a very good picture - the shade isn't as large as it appears!

Have a great weekend!

ps - it is thundering here - I refuse to go out and drag the trash can back in the garage because if I do I know for sure it won't rain so I'm leaving it out!
Posted by TinaTx at 1:48 PM

You did a fantastic job - love the lamp shade. All we got was thunder - no rain - hope you got some rain!!

I was out watering and it said it was 110 on my barometer. Anyway, LOVE the lampshade and the lamp! So darned cute. I'm glad you told me about the spray adhesive. I have some but haven't used it. And I don't want a self-induced migraine.
Brenda

You did a great make-over job, Tina. I think the size is fine. The shade in the last pix does look a little too big...but I'm sure that's due to the angle of the shot. WELL DONE :-)