Did ya miss me?

We had a great week. Hubby had the whole week off - I can't remember the last time he has taken a whole week that didn't involve a u-haul truck! We had a few (not nearly enough) days with the kids, met friends for dinner one night and did some stuff around the house. I didn't get a lot of photos - we were busy visiting and time just passes so quickly when we only get them all together once a year. 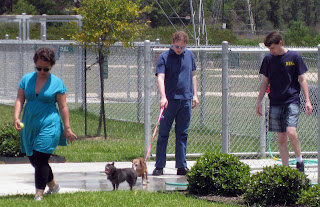 The kids wanted to take the dogs to the dog park. Middle of a work day and no other dogs around. I can tell ya, I didn't think it was a good idea being as it was blistering hot! We didn't stay long and the dogs were just as happy it was time to go as I was! 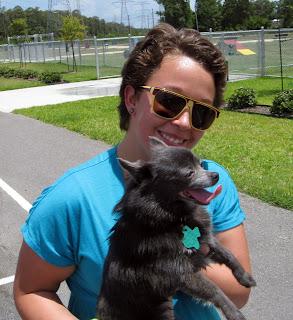 Squeaky was visiting too - she has now moved to the big city with the baby boy and his bride. 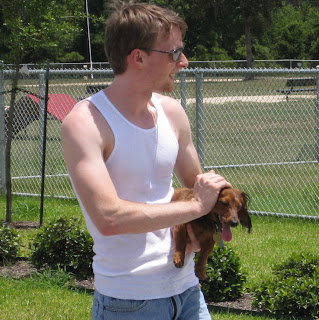 Nicholas was tuckered out - he thought he had to see as much of the place as he could - it's not like he hasn't been there before! 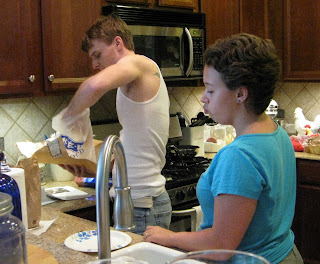 Baby boy and his bride got the shrimp and fish ready 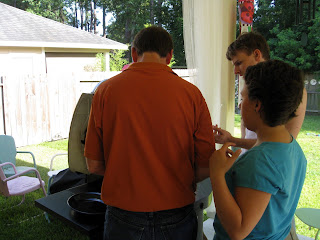 and hubby fired up the grill. It isn't a big grill since it is usually just the two of us so it took awhile, but they grilled steak, sausage, veggies, fish and shrimp! We had enough meat for two days and just added some more veggies the next day.

We did manage to get the kids all in one spot at the same time for a few pics - I'll show those next time.

Not a single needle picked up all week but I did get together with 'the girls' for awhile yesterday afternoon. Nothing ready to show yet - maybe soon. :)

Waiting on a plumber at the moment - more about that later. It's always something!