I picked up these two little pumpkins at Wally World a couple of weeks ago for (I think) .97 each. 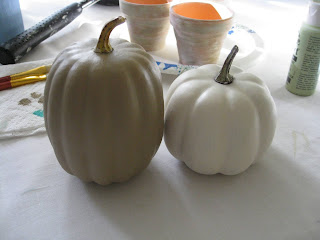 They were both orange but I knew I was going to paint them white. The problem came with the one on the left. It had little green stripes in each crease and no matter how many coats of paint I put on, the green kept bleeding through. (I was doing this while I was painting furniture last week, but I just used craft paint on these) I finally gave up and found some khaki paint and that seemed to cover it. I waited to see if it was going to bleed through but thankfully that color worked. I'm still debating - should I paint the stems? If I paint them, should they be green or brown? 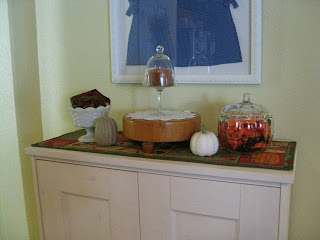 While I'm pondering stems, I put them on top of the cabinet in the kitchen.

I'm once again waiting for paint to dry. I seem to do that a lot. I've got one coat of paint on both the pantry and the small closet under the stairs. I did not take before pictures - seriously, just two small cubbbie holes with flat beige paint and wire shelves. I can't say that there will be much to see after I paint either. (I'm just painting white and going back with the same shelving)

I would love to have a pantry where I could use one of those pretty glass doors or even an old fashioned screen door, but I use the racks that are on the inside of the door. :( While I was in there painting I kept trying to figure out a way to make better use of the space so I haven't given up totally! There really has to be a better way. I am adding some lighting - I have no idea why they did not put a light in the pantry. Seriously, it is the only closet in the house without a light. I tried some of those 'tap lights' and they were better than nothing, but the other day I found some small, battery operated strip lights (LED) at Sam's and figured they had to give off more light. They were not expensive and since they are LED, shouldn't run through batteries too quickly, especially since they won't really be on much.

Well, I'm going to try to read a few blogs, then get back to painting. Small space + large, claustrophobic woman = it ain't pretty but it is getting done!

Have a great weekend!
Posted by TinaTx at 3:06 PM

I like the stems just as they are. Pretty pumpkins!