We have been invaded

By killer skeeters! Well, according to the tv, they are 'harmless', meaning they aren't bringing West Nile Virus with them, but the suckers can (and do) bite right through your clothes! Nothing comes free and this is how we are paying for the rain we had two weeks ago. The temps are supposed to start down tomorrow - hopefully enough to kill the killer skeeters. They don't usually bother hubby but they have even driven him indoors the last few days.

Since I don't have any skeeter pictures (if I get close enough to one to snap a picture you can bet I'll be killing that sucker, not snapping a pic!) I'm showing the other closet I painted Friday (instead of pictures of skeeters). 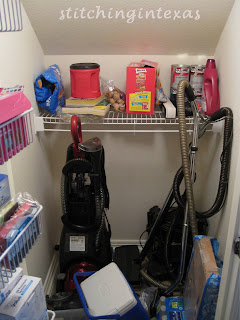 This picture was right after we moved in. This is under the stairs - I should have measured how far that shelf is off the ground but I didn't and I'm too lazy to go do it now. I don't know if they intended it to be some kind of coat closet or what, but the only coats that would hang there are kids coats - small kids. My 'baby' will be 25 in a few weeks. 'nuff said? 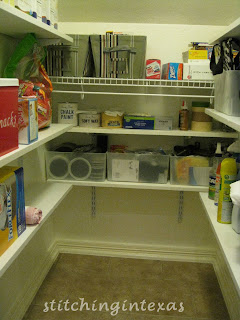 I got it painted and we added shelving. I considered taking that wire shelf out completely but it wasn't going anywhere w/o having to do some major wall repair - I have no idea how they got that sucker in there, so I just painted around it. Hubby seemed a little concerned that I tagged the shelf under the wire shelf 'the chalk paint shelf'. I only have the one can of paint and one can of wax at the moment, but I guess he got the hint that I won't be stopping there. (there is room to move the other stuff around)

This completes the (boring) closet tour for the week. The only things left to paint (inside) are the master closet but I want to rebuild the racks/shelves in there first, and the kitchen cabinets but I'm still debating chalk paint or hiring that out so both of those projects will be put off until after the holidays.

Tomorrow is reality Thursday - there is a lot of reality going on around here right now!

Making a casserole (King Ranch Chicken) to freeze for next week. I will make a small pan for dinner tonight and freeze a larger pan for next week. Don't want to spend all my time in the kitchen when the girlfriends are here! Off to check on my chicken!
Posted by TinaTx at 2:06 PM

I need to repaint the closet under my staircase. I use it as a mini play area for the grandkids. Great place to keep their toys out of the way when they aren't here.
The walls are white right now but they need to be painted a darker color to hide the scuffs and such.

wow....you have been really busy...i admire all of your energy! :D.....hopefully i will catch it too, hehehe....everything looks really great!

You wear me out just reading your blog! I wish I had half of your energy and desire. My house wouldn't look the way it does right now if I did. Everything looks so nice and fresh and clean at yours. Keep up the great work!! HUGS

ooooo well done ... looks soooo much better now .. and mmmm not sure how tall the peeps were who had the house before ..lol ... Have emptied my craft room almost .. rest getting done today and next week going to get some paint and re do mine as you have been inspiring me ;)hahahaha love mouse xxxxx