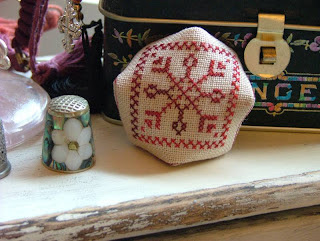 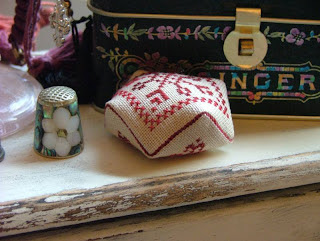 I have no idea. Hard to figure out what to say when all you do is wonder when your headache is going to go away. If this one is anything like the one this time last month it will be at least several more days. Ugh. (yes, I have meds - they aren't working - going to have to call the dr again) Not looking for sympathy just telling it like it is. Not exactly productive at the moment, although I did stitch on a pillowcase a little last night - no counting! I don't have to concentrate as much on those as I do on cxs.
I thought I would post a picture of my first biscornu. I finally got it sewed up last week but didn't get a picture until yesterday. The instructions I have say to sew a button in the middle (on both sides) but the buttons I bought didn't really match too well, and I decided I liked it as is anyway. The hardest part of the whole thing was holding the little bugger while sewing it together - I think a larger one would be easier simply because you would have more to hold on to while stitching.
Posted by TinaTx at 7:33 AM

That is really pretty.. You do wonderful finishing work.

I hope your headache goes away.. sorry to hear you are suffering.

I REALLY ENJOY YOUR BLOG. YOU ARE SO TALENTED, AND I LOVE SEEING ALL THAT YOU CRAFT, BEAUTIFUL EYE CANDY.
SO SORRY ABOUT THE HEADACHE. HOPE YOU FEEL BETTER VERY SOON.

Beautiful work! I can't imagine connecting all the points so well!

Sending (((hugs))) and hope your headache goes away. And wishing you quiet dark soothing moments.

I have enjoyed reading your blog, thank you for your sharing. And I do hope that your headache goes quickly. Your finishing on this piece is just outstanindg,