As usually happens when we all get together, I take the camera, then I don't get many pictures. I wanted a picture of my three boys together (the last one was 2 Thanksgivings ago) and one of the four kids - yes, I still think of then as kids, together (my 3 boys and DIL) but it didn't happen. Maybe at Christmas.
We usually have holiday dinners at my sister's house. We all live in the same town (myself, my sister and my parents - I have a brother in Arizona) but my sister's house is the largest and out in the country so it isn't as crowded when we all get together - plus, after lunch the guys can get in some practice hitting golf balls. 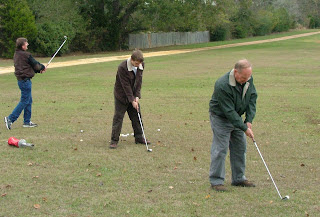 L-R Hubby, Jason, Dad. I'm guessing there are more than a few balls in the pond. 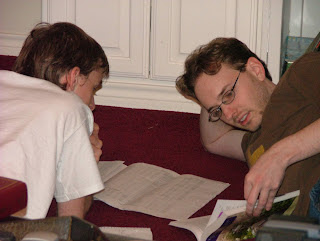 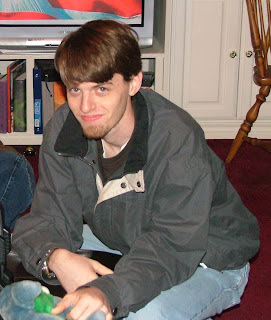 and Mr. You aren't really going to take my picture are you? (Timothy) He takes after his mother and HATES to have his picture taken so it is a pretty rare thing to get one where is isn't in motion - hiding from the camera. Today I am debating whether I want to move furniture around in order to put out Christmas decor or not. I may have to think about that through another cup of coffee.
Posted by TinaTx at 7:57 AM

You've got a lovely family!!!! I'm draggin my feet about Christmas decorating as well. Going for just a small table top tree this year! Love, Esther