A battle and a movie review

This was the project I tackled last weekend - in between hubby's reunion stuff.
I've introduced the beast here before. We battle every time I let it out of the closet. Well, last weekend my friend Sherry was supposed to come help me make new cushions for this chair but she got sick and didn't get to come. 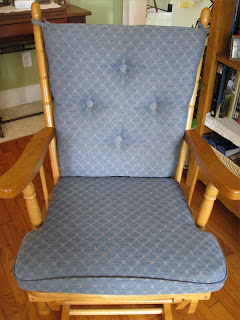 There really isn't anything wrong with this chair except that the fabric screams 1994. It really hasn't bothered me as I'm not opposed to blue or pink and I've had it in the bedroom where it worked just fine - but hubby brought a chair home from his mother's (it is pretty much 'just for pretty' but that is another story for another day) so I had to move this one to the living room. if you look at the wall behind the chair, you can see that my living room is green - really green.
I had no idea when Sherry would get another chance to come over, so - I decided to tackle it myself.
This means I have to let the beast out of the closet.
First I had to cut the new foam. This was fun. After wrestling that huge (expensive!) piece of foam and an electric knife, I had my pieces cut - and foam all over the guest room. Then, I was going to do a trial run with muslin before I cut into the fabric I was planning to use for the new cushions. I really don't have a good place to spread out for a project like this so I moved the coffee table in the living room and parked my big self on the floor. In my attempt to move around I managed to sit on my pincushion. Not really a big deal if it had just had pins in it, but the needles were another story. Once wasn't enough. I thought I had made sure there were no pins or needles left in the rug but I was wrong so I ended up with another needle in the ass.
I managed to get the trial run finished - figured where I need to make changes and got the 'real thing' cut out and sewed together without sitting on the pincushion again. I made no attempt to match anything anywhere - I figured I did good to get it all going in the same direction.

It is far from perfect and I 'may' someday take it apart and try to fix some of the errors, but for now I think a nice throw draped across it will do just fine! I'm still debating painting the wood parts. Another project for another day.
Now for the movie review. I've been seeing advertisements for Mamma Mia and thought I wanted to see it. I knew hubby wouldn't want to, but after I made him feel guilty for making me see Sex and the City by myself he agreed to go. He has been moaning and groaning at the prospect ever since so I just decided to go by myself this afternoon. (I really didn't expect it to be FULL at a 1:30 showing!) Anyway - I know he wouldn't have liked it, but I did. If you are out to see an Oscar winning movie, skip it. If you want something fun with lots of laughs, then go see it! Pierce Brosnan isn't going to win a Grammy for his singing, but he looks good so do we really care if he can sing? If you go, be sure to stay for the credits!
Well - that's it for me for today.
If you haven't left a comment on the post from the 15th be sure to scroll back and leave one. I'll be drawing a winner from the comments on that post for my giveaway on Sunday!
Have a great weekend!
Posted by TinaTx at 6:42 PM

OUCH!! My arse is puckering in sympathy. lol Turned out pretty nice, though. I like the new fabric, too.

So if you paint it, what color were you going to chose? Shabby chic white? (See - I love all things shabby chic, but can't seem to get that look to work in my own home so I'm constantly pestering other people to do it in theirs. lol)

Glad you liked the movie - I love Pierce Brosnan. Remember him in Remington Steele?? I adored that show - he was sooooo cool (and goofy. It's great how he could pull that off). My boys and my nephew went to the midnight showing of Batman last night and are raving about it. Now my husband wants to go. I'll probably go with him, but only because I'm dragging him to the X-Files movie on the 25th. lol

The reupholstering looks awesome!!! You did a wonderful job.

Hey I think your chair turned out great. I love to sew but would be scared to tackle a project like this. Green is my favorite color so this really appeals to me. You did a good job Tina - be proud of your work!

I love the fabric you chose and think the project came out beautifully! You're a better woman than I LOL

Well, Tina, everyone calls me a pain in the ass. But the one thing I think I've failed to do is sit on a loaded pincushion! Twice???? I love the chair redo, and if you ever decide to paint it, you might consider the white or cream or whatever of the material of the cushions. Course, I'm sure you've already thought of that! Sorry you didn't make it yesterday. Don't know which movie you went to, but if it's the newer one on S. Broadway, you can see my house from the parking lot if you look east across the highway!
xoxo, Brenda

Hey Tina....the cushion re-do turned out great and I really like your fabric choice...when I clicked on the picture I could see the design was green...love it.

I saw Mamma Mia today and loved it...like you said, lots of laughs and wonderful music. Have a nice evening...hugs, Linda

It looks really nice, I love the fabric you chose for the chair too. I don't think I could have tackled that by myself at all so a double congrats from me I envy your talent.

Happy Birthday Tina - didnot want to add birthday wishes to yesterdays comment as it was a day early - hope you have a great birthday with lots of family and fun!! Have a great one - Anne

Tina ; Happy Birthday to you! Thanks for stopping by my blog; yes, some of the bulldogs in this house snore; not all; but the worst thing they all do is pass gas! WOOOOOEEEEE! LOL; but they love you to death to make up for it! I noticed that you had referred to losing a doggie; so sorry. When you do get another consider a bully; mine like to "help" me sew and decorate! Well, you have a great birthday you are a great gal! Merrie

I just love the new fabric on the chair.... very pretty....
HUgs
Linda

Now that I am up off the floor from laughing, I can make comments.

Your chair turned out beautiful in spite of you sitting on the pin cushion several times. Better to sit on needles than to step on them and run them into your foot. That is really painful.

So you liked Momma Mia? I was thinking that I wanted to go see that the week of my birthday with Reina and Anita to celebrate my birthday.