Shakespeare in the Park

Whew! How does one get so far behind when away from home for less than 36 hours? I came home to 272 blog feeds to read - and now I have 312 - this may take awhile! LOL (we won't even talk about how far behind I am on laundry!)
So - were did we go? We went to the 'big city' - Dallas. First stop was to meet baby boy and check into our hotel (so he could leave his car there and us not run around all over Dallas in two cars, plus - we had his bride with us!) Then we headed to The Red Shed. Of course by the time we got there they had been open for several hours - would have loved to be there bright and early - maybe next time. I could have found lots of things to bring home if I had had more room in the van! I did come home with this vintage sheet. 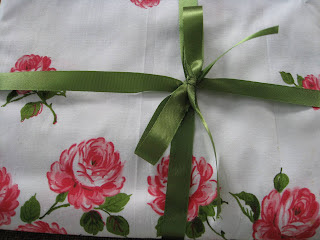 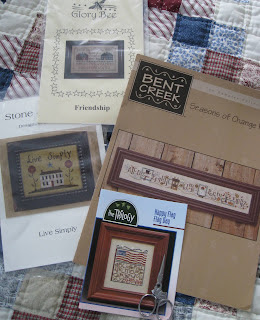 Then we headed towards Lewisville and Aidaworks. I didn't pick up much - a few charts and a small pair of swan scissors. (no - the other riders in the van weren't excited about either The Red Shed or Aidaworks but that is the price you pay for riding on my dime!)

Then - the real reason for our trip. 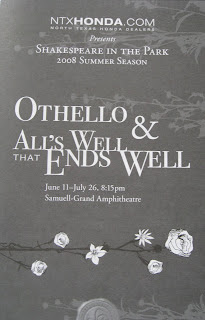 Baby boy is performing in Othello at Shakespeare Dallas through July 26.

Here is his name in the program. :) 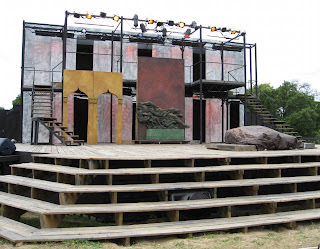 I really wish I had pictures of him on stage, but photography is not allowed during performances but this is the stage before the show. The weather was iffy at best. We kept waiting for it to get rained out but we were lucky. There was enough wind to keep it from being so hot and it also kept the skeeters away! We did get some sprinkles but the storms seemed to go right around us and we made it to the end! (watching the news later, some areas got hit hard!) I was so glad it went around us. We could see lightening - we could even smell the rain! It was probably our only chance to get there to see the show so I was happy to see the end!
Okay - now to try and catch up some more around here!
Posted by TinaTx at 5:29 PM

Sounds like you had a great time! And I agree completely - there is NO requirement to know exactly what you're going to use something for at the time of purchase. I bought a perfectly lovely, pink trimmed vintage pillow case months and months ago. And I just know that, one of these days, I'll find the perfect pillow to put it on. Maybe. lol

Glad you enjoyed the play - too bad they wouldn't allow photos. Those probably would have been AWESOME to see!

I bet you are so proud of your son - Dallas is such a fun place to visit. Hope you have a great fourth weekend.

Nice stash purchases. Most times we never know how or when we will use our purchases. However, if we don't get them when we see them, the next time they won't be there and we will be sorry we did not get them the first time. Good logic right?

You must be very proud of your son and his accomplishments.

It's easy for me to get behind and I haven't been going anywhere! LOL! Sounds like your trip was lovely. Housework looks great!