If you have been here before, you know we have had our house on the market. Our house we lived in and worked on for 24 years. 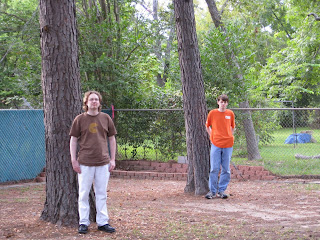 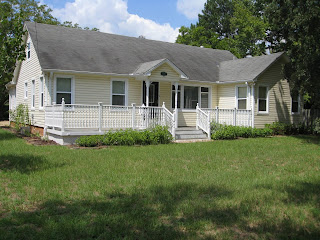 There is a lot of blood, sweat and tears here. It took 20 years to get this porch. I love this porch. 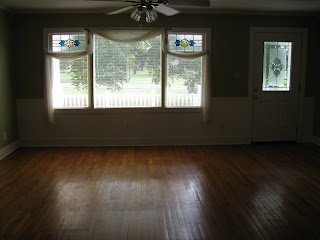 When we bought this house it had green carpet everywhere except the kitchen - it was even in the bathrooms! The floors under the carpet were oak in the living room and master bedroom (the others were pine) The side windows in the living room were single hung windows and the right one had a huge a/c unit in it. When it quit working and we went to take it out, we discovered that it was larger than the opening and they had cut into the frame to install it. We lived with foam stuck in the cracks for several years, then I spotted these stained glass windows at an antique store and they were a perfect fit! (we added central air and heat) 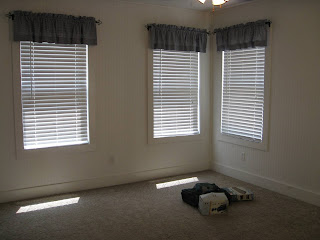 I wish I had before pictures - from when we bought the house. The walls were all flat white paint (sheetrock - or if you aren't from the south, drywall) The trim and doors looked really good but it didn't take long to discover they had painted latex over oil and we soon had peeling paint everywhere. (on the floor - our beds for Sunday night) Hard to tell in this pic, but that is bead board paneling - I love that stuff!) 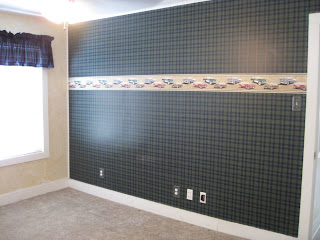 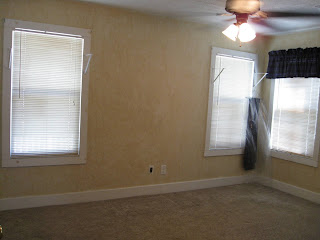 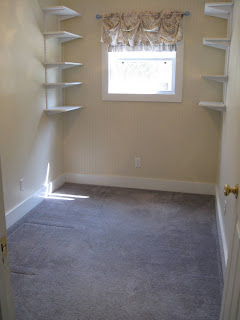 This room was originally a closet. We converted it to a bedroom when it became clear the middle and youngest could no longer share a room. Baby boy 'lived' here until we took in the attic and then this became my little office. 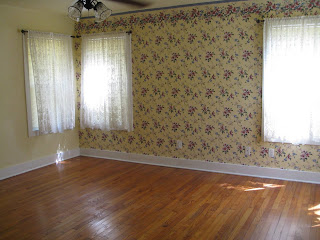 More oak flooring that had been covered with ugly green carpet. 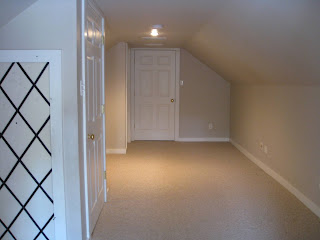 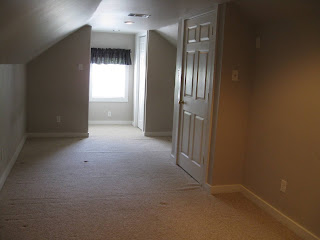 These two pictures are what was once the unfinished attic. 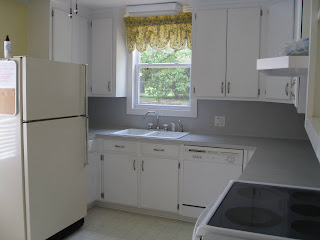 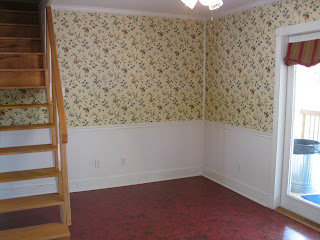 Dining room - the stairs are where there was once a pull down stair for the attic. Where the door is (should have taken a better picture) there used to be 4 windows. We took those out and put in the French doors. This floor was pine (covered with ugly green carpet) It had places that needed to be completely sanded and refinished - I painted it instead. 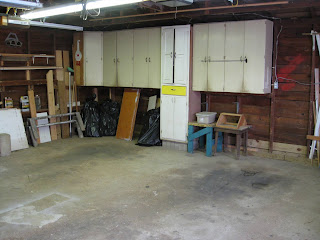 See those ugly cabinets - they were in the kitchen (except for the tall one - it was in the bathroom - it didn't have the yellow drawer when it was in the house. The drawer was used on a play set when baby boy was in high school and they painted it yellow)
Why am I showing all these pictures? Believe it or not - out house finally

I could go on and on here about what a nightmare it was. I resisted all month about coming here to post about how inefficient these people were. It was never just one person, but the combination of all parties involved. (I'm not naming names but boy would I like to) If I could go back and change some things I would - starting with when the buyers went on vacation without signing the papers - they were first time buyers and their agent new they were going on vacation but she didn't make it clear to them that it wasn't a legal contract until they signed it. They thought a verbal was good enough. We should have stopped it right there and let them present another contract when they got back if it was still available (of course since they had a contract working, if someone else called to look at the house that is what they were told - that it had a contract working, which basically meant our house was 'off the market' since no agents wanted to show it then) We got the contract in early July (although by the time everything was signed, it wasn't dated until July 15) and it was set to close on Aug 18. We already had a trip planned for the first week of August (that is another post or three) We couldn't change the date of the trip so we cut it short by 3 days to get back and get everything done in a timely manner for the closing on the 18th. Apparently we were the only ones interested in doing things in a timely manner. By the time we got back from our trip there had been so many delays I was only willing to do so much without a firm closing date, but we started moving stuff out. Oldest had already secured an apartment so we moved him on the 21st (the day we would have had to be out of the house had it closed on time)
If I had a dollar for every excuse or every time I heard 'it's out of my hands' I could pay cash for a new house. I swear sometimes I thought we were dealing with Donald Duck and Goofy. (I'm sure they could have done a more efficient job) We also heard a lot of 'we just need one more thing', of course when they got that one thing, they needed one more thing. We ended up signing 3 extensions on the contract. We finally had a closing date of Friday (the 28th) at 10:00am. At 9:50am they were still waiting on 'one more thing'. I was pretty much done with this contract by now - the last extension expired on Friday and I was ready to put the house back on the market on Saturday. They finally got the last 'thing' at 10:10 am on Friday and set the closing for 2:00. By the time we got out of there it was 4:30. On Friday. We had 3 days to vacate - that was not so much the problem since we had already moved so much, but how do you contact utilities on the weekend? I could keep going. I still have a lot of pent up frustration over the whole thing - and trust me no one had any doubt about how frustrated I was . (Hubby says I don't handle stress well)
I thought when all of my things were out it wouldn't seem like 'my' house anymore, but as I walked through taking pictures, I still love every inch of that house. I wonder if she will miss me as much as I will miss her.
Anyway - after filling 3 storage buildings and Brian's apartment, not to mention all the stuff we already have in our apartment (in 7 months we never came back from a trip with an empty car - and we went 'home' at least twice a month!) plus all the stuff we hauled to Goodwill and who knows how many trash bags went out, we came back to Houston Monday completely loaded 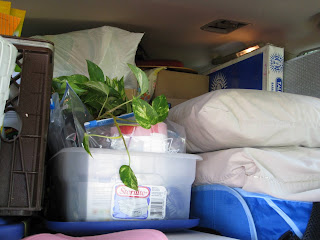 See that blue thing in the bottom corner 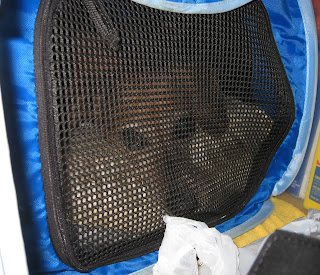 that is all the space Autumn had to ride!
We have a contract working here on a house, but after all the crap that we went through the past 6 weeks, I'm not counting any chickens until the eggs hatch. (and getting this far on that wasn't a piece of cake either) I'll tell you about that when it is a done deal. Keep your fingers crossed!
Things here are still a mess - boxes everywhere and no place to put them. I'll post about our trip sometime in the next few days.
Hope you are all having a great week. Me - I'm just a little tired!

Oh man, what a mess. I've been there, too. The first house we ever sold was a nightmare just like that. It took me years to get up the confidence to buy another house; but when I did, this time I found a jewel of an agent. Things went so well, I've used the agent to sell that house and buy this one! If you ever get a good realtor, hang onto her! Here's hoping your next purchase is handled without problems!

You forgot all the "stuff" that is at your dear baby sister's house : )

I am so sorry your experience was such a nightmare for you. I am sure she will miss you. You obviously showed her alot of love and affection by fixing her up!

OMG - how annoying! And how ridiculous! DH and I were first time home buyers last year and maybe we're just out of the norm, but we made sure we had everything together - all the paperwork, checks, etc. It's not that hard - even if your agent is an idiot, there are dozens of checklists and step by step guides available. Really, there's no excuse for that kind of delay other than stupidity. Sorry you had to go through that!

That sounds awful, yet I am so glad it is sold. We also have been through the "one more thing" so often. Lots of Disney characters out there.....
I hope and pray that your contract goes well on the next house! I love the trees and the boys next to them. So special. :) Terry in Arlington

Oh sweetie, I am so sorry for the nightmare you had to go through!!! I feel so bad that you had to sell a house you love so much. It makes me feel like crying :( I hope you love your new home just as much. I will be praying for yoU!!
Love,
Amy

Oh, Tina so sorry you went through such an ordeal. Hopefully your closing will go without a hitch. Looking forward to your pics of your new home.

OMG!!! It's hard to believe that you were able to maintain your sanity with that ordeal. I bet once you get another house you are never going to sell and move again.
How is the house hunting going? Hope your purchase goes waaaaay better than the selling process.