If you do much blog hopping at all, no doubt you have seen many things made from simple painters drop cloths so this is not an original idea but here goes. 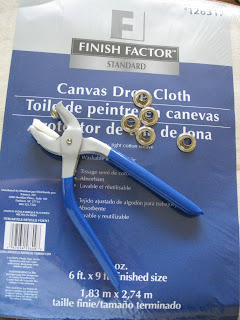 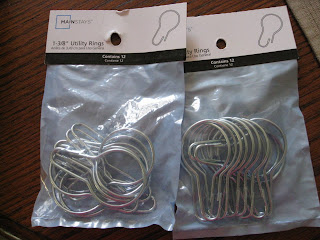 Who would have thought these little buggers would be so hard to find? I finally found these at Wally World, not with the shower curtains (all you can find there are the decorative kind - not what I was looking for!) where I had been looking, but with the regular curtains - as you see, they are no longer called 'shower curtain rings', but 'utility rings'. I say if it ain't broke, don't fix it, but whatever. Anyway, now that I had my supplies, I could move on to this. 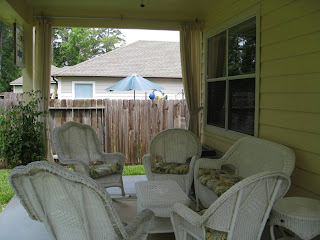 I made these for both sides of the patio. In the morning and evenings the sun blares in and makes it to hot to sit out there. Privacy isn't really an issue as we do have a 6' fence but that sun can be brutal! (obviously I still have some work to do out there)

I seriously just opened the pkg and put in the grommets along the top. I ended up using 9 grommets per panel. I used electrical conduit to hang them from (less than $4.00 for a 10' pc.)

Now here is the thing I want to tell you about using drop cloths. I just put these up to block the sun when it is blaring - I didn't really care about the length. They are already finished on the ends so I left it as it was. I hung them up and they were too long - as in dragging the patio. I knew they would shrink when washed - I was actually afraid they wouldn't shrink enough but I needn't have worried. 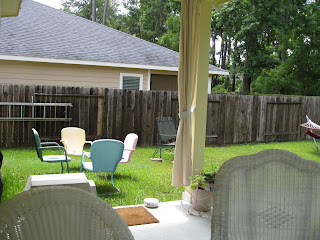 See how much they shrank? This doesn't bother me in the least, I'm only pointing it out in case you decide to make something out of drop cloths and it is something where shrinkage would be a problem. Wash and dry them first! In fact, I'm not sure I wouldn't wash and dry them a couple of times just to make sure they were through shrinking before making anything where shrinkage would matter. (like indoor drapes or slipcovers) They sure have made a difference as to when we can actually sit out on the patio!

We started with cheap bamboo looking roll-up shades. They ruined after several years. This time we bought some made for outdoor use. As the sun sets in the evening it shines onto our patio.
Blessings,
Lorilee

Well, you are just so fantasticly clever! What an awesome idea, Tina!

Your patio looks so inviting, and the curtains will really help. Texas is a tough place to enjoy the outdoors, with the heat, humidity, wind, etc. I love the conduit idea too. Terry