What do you do when you have nothing to post? I dug out a pic from last week - or was it the week before? Anyway - I finished the month 6 blocks for the Thimbleberries quilt (from 2009 - I'm a little slow) but once again Blogger is messing with my photo! 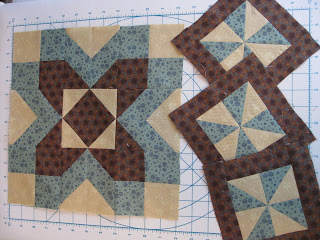 I can't seem to get my rear in gear this week. I know there are lists of stuff that need to be done, not to mention the lists of things I want to get done. Problem is, I'm not doing anything off of either list. I seem to dabble a bit here and there and not really accomplish anything. I'm feeling kinda useless I guess.

I guess there is always tomorrow - doesn't mean it will be any more productive than today but it will be here sooner or later anyway.

We actually have a chance of rain for Friday. We are getting so desperate for rain that we are watching the tropics hoping something develops instead of the other way around! (no hurricanes, thank-you-very-much, but a depression that pushes some rain inland would be nice)

Well - back to doing whatever it is that I'm not doing.
Posted by TinaTx at 3:38 PM

You're on the right track! Whenever I'm stumped about posting, usually I can get started with a photo. And I love your pinwheel blocks!

reminds me of a song I sung as the leading lad in the panto (always played by girls..lol) I'm busy doing nothing working the whole day through, trying to find lots of things not to do ... I'm busy going nowhere isn't it just a crime .. I'like to beeeee unhappy but I never do have the time .... love mouse xxxx
ps hope that sends some rain me singing ..lol would dance but not too good tonight ..lol xxxx

pretty blocks! I feel the same way, hard to get motivated or focused.

A Cozy Cottage in the City said...

Hello! Thank you so much for stopping by my blog! I see you love to stitch? I'm trying to learn how to sew. For now, I'm just trying to find the right beginner book to get me started. ;) Anyway, thanks again for stopping by, and have a wonderful day! ;)