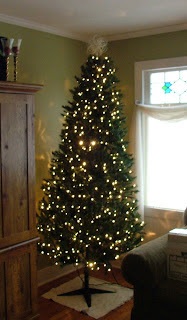 Yes, I know it looks a little drunk. After several attempts to get it straight I decided to get it decorated then move it back to where it will stay and then get it straight. Every time I would get it straight then touch it again it would move! I'm trying to get myself out of that 'OCD' thing I have with how things are done and not stress about it so much. Normally this baby would sit here for a couple of days and I would play with the branches until I had them all shaped just right, but I decided to just go for it and get it decorated today. Now that I see these pictures, I see that the lights need some work. Or maybe I just need to re-arrange some ornaments. 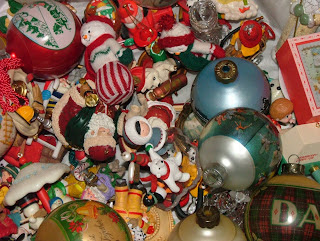 This is the first box of ornaments to go on the tree. There is just so much that OCD stuff you can whip out of the girl at a time. All of these came out of (and will go back in) their original boxes, I did put them all in a basket, then go back and do hangers, instead of unboxing one ornament at a time, putting a hanger on it and putting it on the tree. It did seem to make the process go a little faster this way. I always do all these type ornaments first, then the stitched ornaments, then the last thing to go on are the glass icicles. I got myself a little out of order as Brian wanted to do his ornaments this year (he wasn't here for Christmas last year) so I skipped his box and got everything on the tree except for his ornaments and the icicles. (he went to do a little shopping this afternoon) As soon as he gets his on, I'll finish up and call it done. After 5 hours work, this is what I have so far. I took 6 pictures and this was the best one of the bunch. When I get it completely finished, I'll try to get one that isn't blurry. 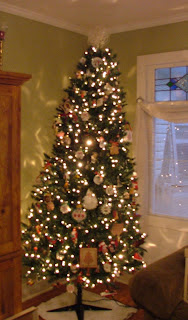 I'll work on the rest of the house later. I think this is enough for one day.

It looks dazzling, very christmassy!! I have bought some x-mas gift bags this year (I am having a gift bag obsession out of nowhere), the bags are so charming and only a $1 or 2 and they helped to make my living room cheery, (maybe I should take photos and blog about it), the bags will double as project bags. Btw, I also try to stay balanced on the tightrope of ocd but if you ask my husband, he'll say I don't always stay on the rope.

I was wondering if you would get your tree up today. It looks great. See you Tuesday.

Yippee!! You got rid of that bah humbug and put that tree up.. good job and it looks beautiful. Michelle

What a beautiful tree! Way to go on getting it up.

The tree looks great. I look forward to more pictures. From what I can tell you have some pretty ornaments.

looks great, you are way ahead of me.