How has your weekend been so far?

I am spoiled. I know this. Yesterday my day started with making my own coffee. Huh, you say? 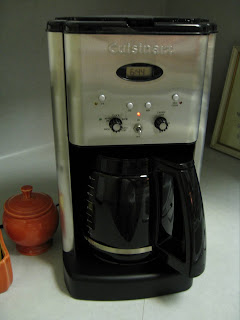 It is hubby's job to make the coffee - I admit we have had this coffee maker for some time and I had never made a pot of coffee in it until yesterday. I had to get out the book to even figure out how to make it work. Hubby took this job on all by himself - I used to do it (we had another coffee maker then) but then he started and it became his routine. (his coffee is better than mine too) The last thing he does before he goes to bed is get the coffee maker ready for the morning. I'm really spoiled because not only does he do that, but he makes my first cup in the morning.
Hubby went to work Friday morning at 7:00am - he finally came home at 7:00pm last night. It was a long 36 hours - he crashed for 6 hours (after spending another 4 hours or so on the phone) and went back this morning. He will be home tonight and hopefully things will go well and he will get his day off tomorrow. Kind of all depends on the weather, etc. If he is here, we will have to move things around in the yard, just in case we get the weather they are warning us we are going to get. If he isn't here - I'll have to get Timothy to help me. He loves it when I have things for him to do.
I stitched quite a bit yesterday but I can't show you since it is an exchange piece - so I am going to show you some more of the moving around I've had to do to get this room together. Are you bored yet?
So - the bookcase that was on the left side of this room went to Timothy's room since he had this bookcase 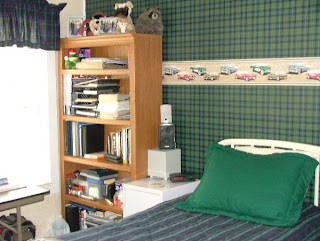 and it matched the other one from this room. He wasn't here so I unloaded his stuff, we moved the bookcases and I reloaded his stuff. (this is an old picture - he has more stuff now!) 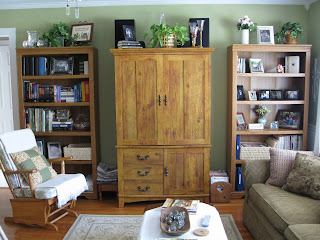 The two matching bookcases then went to the living room. (when they were in different rooms, I thought they matched the tv cabinet better, but at this point it didn't matter!) I just threw everything back on them and have no idea what I'm actually going to end up with there, but at least it isn't all piled on the floor. Some of it is from the bookcase that was there, some of it was in here. (There was a smaller bookcase on the left - it went upstairs.) The reason there is a gap between the tv cabinet and the bookcases is because the doors on the tv cabinet are crappy! There has to be that much clearance for them to open. Terrible design and I'll know better next time! There was a sampler hanging on the wall to the right of the tv - it was too wide to fit the space between, so it had to be moved too. 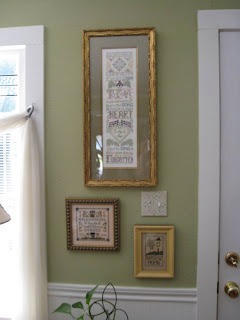 It landed here. Of course there were other things hanging here and they had to be moved. (none of these pictures were on this wall) I told you this was a complicated process! I have no updated pictures to show of this room since, as I mentioned above, hubby hasn't exactly been here to help with the things I need his help for. Maybe tomorrow! 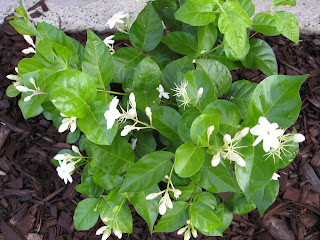 I'm not showing morning glories today but I wish you could smell this. I think it is a dwarf gardenia. It smells just like a gardenia. (which I love the smell of in the garden - hate it in anything scented) From the looks of that sun you wouldn't think we are looking at possible flooding in just a few days.
How is this for a totally rambling post? Guess I should go check on the cake in the oven. Hope I still have readers after this ramble - now you know how my mind works.
Posted by TinaTx at 4:51 PM

You're not rambling. You're telling about your life. What is it I do exactly? Tell about my life in minute detail! I love decorating pics. Can't get enough of that. Never had a gardenia. But I'm for any wonderful scent in the garden. My husband is a psychiatrist at Rusk, so he's gone for long periods too. Was gone all day and night Thursday, yesterday and tomorrow. A lot of overtime!
Brenda

What does the hubby do for a living that he works such long hours?
Love the bookcases placed in the room together (I am a book freak). The little gardenia is beautiful, I've never seen blooms like that. Have a safe and happy Labor Day...

never bored..love all the new posts!
i have a gardenia a child gave me for a teacher gift in June and it has grown to be huge..but no blooms.
spending the weekend at our lake house. :) Terry in Arlington

Hey, thanks for coming over to visit! I love your blog, you write like I talk! I love the header, too!

Love the look of the bookcases. You did good.
Margo

View my blog at:
http://robolady.blogspot.com/

Hi Tina,
I hope Gustav misses you! I am in South Central Texas! Your re-arranging looks nice!
Blessings,
Lorilee

HI Tina...all the changes look great!
I love the gardenia's frangrance too...I keep looking for a lotion that smells good..but nothing seems right.
I hope the storm misses you...we are following it on Fox News and it's scary....be safe..hugs, Linda