So far, five blooms is the most I've had at one time - that has happened twice. Most of the time I only have one or two at a time. The other vine hasn't bloomed at all yet - same seed packet, planted at the same time - who knows. These pictures are from last week when I had five blooms at once. 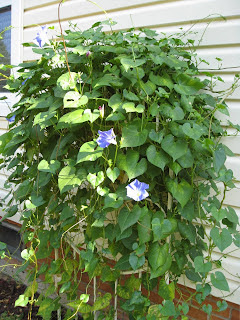 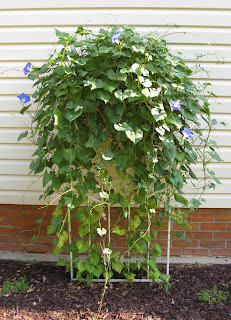 Can't you just imagine what it would look like covered in blooms?
No stitching pictures since I'm still re-stitching what I took out on Sunday.
I have another (non-stitching) project floating around in my head but it is kind of like trying to fit a square peg into a round hole. I'll let you know if I figure it out!
Posted by TinaTx at 7:35 AM

They look gorgeous! They would be totally flabbergasting if the whole thing was covered in blooms!

Those morning glories are beautiful. My SIL has them growing on a trelis around her garage doors, it looks so pretty.

My stepmother has two "patches" of morning glories in her backyard. One patch is blooming like mad while the other is just tons and tons of green leaves. Go figure.

I really like the "beer" bucket, nice job and the magnet is such a good idea. Another great idea....the frog. I have one for pens and pencils but never thought of using one for scissors. Neat, neat, neat.

Your morning Grlory is gorgeous! It's done really well for you :)

Have a great day!
hugs,
rue

Morning glories looking good. Nice greenery too. Are morning glories perennials or annuals in your area? It would be nice to think you would have that nice plant every year.