Not something that sounds like they go together, eh? Well, they don't. I'll get to the migraine part in a minute.

I stitched and finished this ornament a while back and couldn't decide if I was going to give it as a gift or keep it for myself. I ended up giving all but one of the redwork ornaments as gifts (I kept the one that I thought didn't look good enough to give away!) and I kept this one for myself too. It is by Homespun Elegance and is in this years Ornament issue from Just Cross Stitch. I still may stitch it again and change the date for next year - we will see.
Now comes the migraine part. I did see the dr on Thursday - same song, I don't know what verse we are on. Last med didn't work, try a new one. So anyway - after I've been off the last one for a week I can start the new one, but yesterday I had a migraine that for lack of a better description was a bitch. At least I know what set it off. I got one of those fragrance lamps (as a gift, not that that matters as I had been thinking of buying one anyway) but since I know fragrances are one of the things I have to be careful around I didn't light it until I had time to go to the store and check out the fragrances (if you've never smelled them, you can't smell the bottle of oil because it is too concentrated you have to smell the testers they have at the store) so I tested the two samples that came with the lamp. I can usually tell with one quick sniff if it is something that I can't tolerate - one was out of the question the other was okay, but a 'summer' smell so I shopped around and got Creme Brulee. I can burn a CB candle all day and all it does is make me hungry but hubby lit that lamp and the minute that scent hit my nose I was done for. He immediately put it out and took it outside. He opened windows and turned on fans, I took Zomig and Midrin but it didn't help so 45 minutes later I used a Zomig nasal spray - this tells you something here, those things are nasty. I ended up just having to give in and take a nap. It finally went away enough late in the day that I could stitch a bit but I lost several good hours there. I hate that! I don't know if it was just because it was so strong or if it has something to do with the oils, but I won't be trying it again. I'll be sending that fragrance lamp home with DIL (I'm not re-gifting, just giving!) I did manage to finish this little Ho Ho Ho scissor case last night - I didn't have much left to stitch. 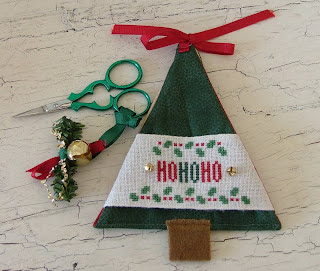 Isn't it cute? It is a Lizzie Kate kit. I've stitched on banding that was already sewn on before but I guess it was the angle this was sewn on - that little sucker was hard to stitch! I'm glad to have it finished before Christmas. I pulled the flosses for the fall one way before Thanksgiving and that kit is still hasn't been started.
Posted by TinaTx at 3:09 PM

So sorry about your migrane, Allergies will do that to me, I loose a whole day when they are bad, that and the "monthly bill". I'm sure you'll find a solution for your headaches in time. Love the ornament, you do such good work, the pictures don't do them justice.

Tina, I'm so sorry you had a migraine..no fun. Your stitching is so beautiful. I love them both, but especially the one with the crowns.

Merry "migraine-free" Christmas to you honey!

I love your new header/banner! I have that identical thimble. :) Terry in Arlington

Thanks, Terry! I was just in the mood for a change! LOL I got the thimble at an estate sale during the summer - there were tons of them but I didn't see them until I was on my way out and I was on my lunch break so I didn't have time to look much, but that one caught my eye.

I had the same problem with Yankee Candle's Sage and Citrus. The scent wasn't bad in the store, but the second I started burning it, it started giving me an awful headache. Now I can't even smell it unlit!