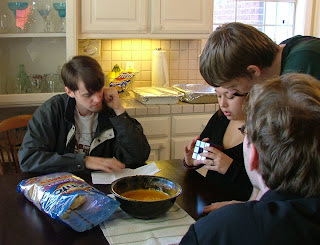 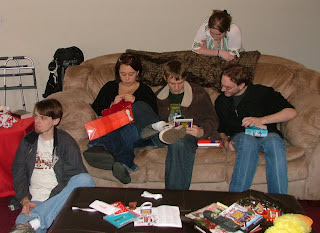 We had a nice day yesterday. It is nice that now, as adults, my children seem to enjoy each other's company. That is my niece, Kaitlyn, looking over their shoulder. Not sure where Shelby was at that moment. 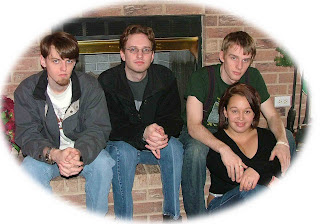 I finally got them to all sit still long enough to take one picture - you can see Timothy isn't thrilled at the prospect. (Can't say as I blame him - he takes after his mother!) L-R, Timothy, Brian, Jason and his bride, Ashley. I never did get a family photo. Who knows when they will all be in the same room at the same time again. Everyone has such different schedules. Just one of the things I miss about the kids being 'kids'. Then I could not only tell them they were getting a picture made, but I could pick what they were going to wear and make sure their hair was combed!

Thanks for the Christmas greetings and for the compliments on my new banner pic. For some reason the old pic was showing up on my monitor with the right side cut off - I don't know if it was that way on other computers or not, but I just decided I would replace it with something new to give it a fresh look.

So, is everyone out shopping the after Christmas sales? Not me. First thing this morning we had about two and a half hours of intermittent power - between around 7-9:30am - right in the middle of my coffee and email! Threw my whole schedule off. (LOL - I have no schedule today!) I'll get out later to take hubby's uniforms to the cleaners, then if the parking lot isn't too bad, I might run in wally world and pick up the prints I sent off last night. Other than that, I have no reason to get out. It is cold and raining so that is just fine. Need to get some things done around here since I will be gone Thursday and Friday.
Posted by TinaTx at 11:00 AM

Tina - great looking kids. Glad you got some good pics. I don't think I got a pic of all mine together either. Got lots of my oldest son taking pics of himself with stupid looking faces (he's only been doing that since he was a small child - wonder if he'll ever outgrow his insanity...) I know you enjoyed having them all home and together. Like a mother hen having all her chicks under her wings. That's what I tell my kids. Isn't it great when they get older and they DO enjoy each other's company instead of screaming and fighting and picking at each other? Guess it's fun to them - it was for me and my two sibs. Glad it was merry for ya'll. My tree and stuff are coming down this weekend. We have a few friends that still haven't made it by and am waiting on them. Meanwhile, the tree needles are falling on the floor, and everywhere else and getting stuck in my new fuzzy socks. Only thing I hate about real trees. Oh well.... Vickie

Aw! Love the picture! My MIL does that to us too - she insists everyone lines up in front of the fireplace (or the Christmas tree) and a family picture is taken for almost every holiday. I complain, but I know that those pictures will be very special as the years go by.