The stockings are hung. . .

all over the house - because we have no chimney! 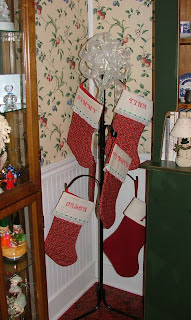 We have had these stockings for a long time. I stitched the names then my grandmother made them into stockings for me. We have had them since before Jason was born. He was due on Dec. 8 (b'day is Nov 18) and I wanted to have his stocking for Christmas - I didn't know with any of mine what I was having until they got here, but he was either going to be Jason or Jamie so I had the 'Ja' already stitched. Even though my grandmother came and stayed with me I still don't know how I managed to finish stitching it but I did and he had a stocking for his first Christmas. You can see Ashley's stocking is different but there was no way to match 20+ year old stockings so I bought that one for her last year (it has an 'A' on it) and I'm in the market for new stockings for all of us. (not that I would ever get rid of these - we will just have another stocking to fill and these 'just for pretty') I had this big plan to make all of us the Shepherds Bush stockings - I have one stitched so far! I think I've had the fabric and charts for, ummm, at least 6 or 7 years. I even have charms for them. 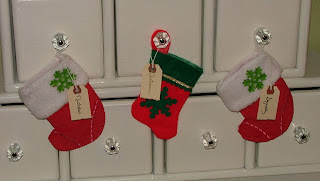 I think you can click on the pic and get a larger one to read the tags, but these are the doggie's stockings. 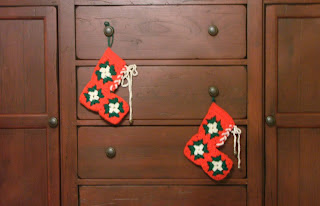 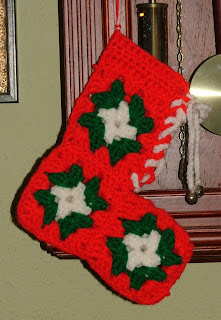 These granny square stockings were made by my great-grandmother when my oldest was a baby. I think they were probably among the last things she crocheted. I only have the three since I only had one child at the time she was making them. (one for me, one for hubby and one for Brian) Someday, I'll split them up and give one to each of the boys. For now, I have two in our bedroom and one in the living room.
Not sure if I will have time to post tomorrow (probably will since I get up way before the kidlets start moving around - its quiet and I like it!) but in case I don't, have a safe and wonderful Christmas.
Posted by TinaTx at 7:28 AM

Love all your stockings. We don't have stockings, but we have the fireplace. Maybe I should send you my fireplace. LOL.

Enjoy your family on Christmas.

Merry Christmas to you and your family! :)