Brenda over at TheBrendaBlog is hosting a 'Where Bloggers Create' party today. My little blogging space is in the process of a make-over. I thought it would be complete by now, but it isn't so I'm going to start with before pictures and go up to where I am now.
First a little background. This house isn't large by any means. We thought it was when we bought it as we moved here from a 850 sq. ft. 2bedroom/1bath. When we moved here we had 1580 sq. ft. with 3 bedrooms and a bath and a half (the boys bathroom had a washer/dryer where we suspect there had once been a bathtub. After 23 years, we still have questions as to some of the odd things we have found here, but that is another story) Anyway - we haven't changed the footprint of the house but we have re-purposed a lot of the space. So, the little room where I blog started out life (as of when we moved here) as a closet. There was a wall that divided it not quite in half and part was a closet and the other part was connected to the bedroom beside it. We could see where this had been one room at one time but at some point a wall had been built to make the closet. As the boys got older it became apparent that we were going to have to separate the youngest two. They just could not share a bedroom anymore. (the real clue came when the middle child started camping out in the closet!) So, with the idea that the oldest would probably move out in a few years (he was in high school at the time), we thought we could make this space a bedroom for the youngest (he was about 10 at the time) and when the oldest moved out, he could have that room. (that didn't happen, but again, another story) So the second life of this room was baby boy's bedroom. I have pictures of what it looked like at that time, but I can't find them at the moment - when I do, I'll share them. That was way before the digital camera! By the time baby boy made it to high school he had definitely outgrown this room, oldest was still living here, so we took in part of the attic to make baby boy a room and I claimed this room for me. Up to that point, the computer had been in our bedroom and I hated it!
So - this former closet turned bedroom turned office is 6'3" wide by 10'3" long. Tiny. Nice size closet - tiny office!
There is what the room looked like 2 weeks ago. 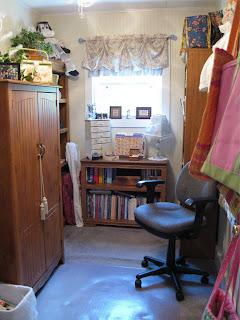 This picture was taken from the hallway - as far back as I could get - through the door. File cabinet and printer are just inside the door, to the left of my computer cabinet. 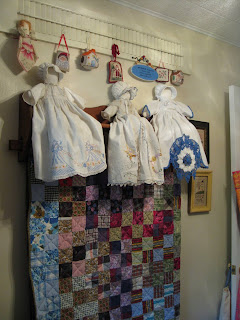 On the wall, right behind me as I type, is a shelf with pillowcase dolls and a quilt. The quilt top was found in a box of scraps when my grandmother passed away a few years ago. We think it must have been the last one she pieced and she never got around to quilting it. I had it quilted and I love having it in this room. The dolls - the one on the left my grandmother made from a pillowcase my great-grandmother had made. The one in the middle was a gift from my friend Sherry, and the one on the right came from my grandmother's house. I don't know if it is one she made - I think it is and if so, it would also be a pillowcase my great-grandmother made. If it isn't, it would be one she bought at a craft fair to see how to make them. (I really suspect it was one she made) 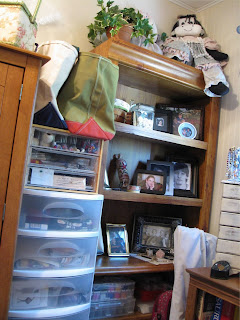 To the right of my computer cabinet is a plastic cart with cross stitch supplies and in the corner a bookcase with more supplies and family pictures. 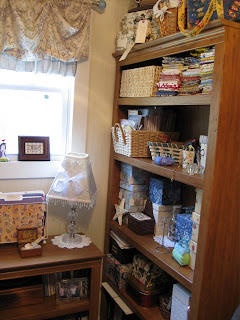 Straight across from that bookcase is another one, also loaded.
Now for the fun part.
I have decided I wanted to learn how to sew. (stop laughing) One of the biggest things is the fact that it is a major PITA to get the machine out every time I want to sew something. It is stored in the back of a closet so not only do I have to dig it out, I have to put it away when I am through. (call me lazy) So I have either committed myself to learning or I need to be committed. Jury is still out on that one.
I talked the dh into putting in a sewing table. Yes, in my little 6'x10' room. I spent a lot of time trying to figure out how to make it work. To start, everything had to come out. That meant unloading all 3 bookcases, the computer cabinet and the file cabinet. How fun. The carpet had a bump in it that needed to be stretched out and it was really dirty so a cleaning was in order (I would have preferred to pull the carpet and paint the floor but as carpet had previously been glued down it would have required a lot of work) So - here is the room empty, with dirty, bumpy carpet. 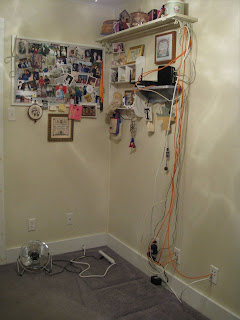 I didn't paint the walls so that stuff didn't have to come down. Our computers are all networked and they run through this room so to keep everyone online while this is happening we had to leave the router and modem connected. 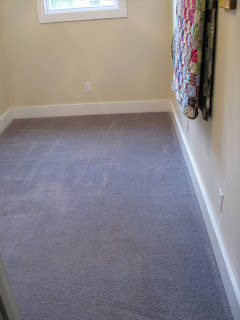 Carpet stretched and cleaned. I did take the opportunity to paint the baseboards and trim. 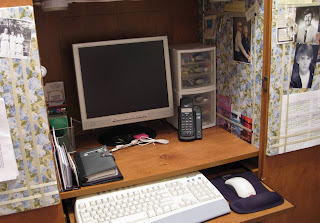 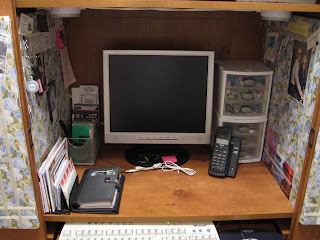 The file cabinet and my computer went back in the same spot as before. This will likely be the only time you see this cabinet open - it is rarely neat enough for a photo. 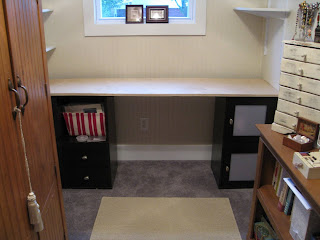 Across the back wall (where the bookcases were) I have stacked 'cube-its' that were in the room upstairs and put a piece of plywood - this is where the sewing machine will go. (that board is now outside getting painted - there is only so much room to work with out in the garage and I needed the shelves painted first!) You can see a bit of the shorter bookcase in this picture (that was formerly under the window) - it is directly behind me now, under the quilt shelf. 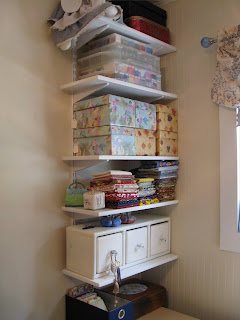 Above the 'sewing table' I (meaning dh) hung adjustable shelving on both sides. 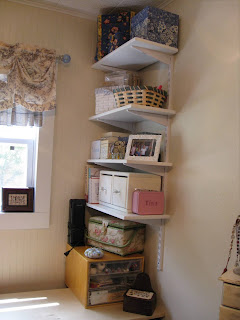 Not nearly as much shelf space as I had before. Later I will show you where the bookcases (that didn't come back in here) landed. Move one thing, you have to move 3 more. I had planned on this being a 3 day project. (I get grouchy when my house is all out of sorts for more than 3 days - especially when it cuts into my stitching time!) We are into week 3 of this project. That's all I have for now. Not really a lot more to see though. The 'sewing table' will be painted white like the shelves and will have a drop leaf on the left hand side (where the plastic cart used to be) I'm still working on what should go where as far as the shelves go.
So, there you have it. This is where I blog. Right now the only thing creative happening in here is trying to figure out where to put everything! If you wonder how a claustrophobic person like myself can work in here, the main thing is that I never, ever, close the door and I absolutely could not make this work with out the window!
Can't wait to see where everyone else blogs!

I love your creative space, and your new space is so efficient and cozy. I would love to create here. Thank you for the tour. Karen

I just love that tiny space where you have your computer! I think it's cozy! I am one of those people who far prefers "cozy" over "roomy." Don't know why. Give me a big house and I'd trade it for a small one! And I really zoomed in on that little lamp. You KNOW how I love embellished lampshades. It is so cute with the bow! Oh Tina, thanks so much for participating in our little tour; and the befores and afters are always what folks want to see. So let us see the rest as you go forward, okay?
Brenda

You have made the most of a closet; that is an adorable workspace. If those pillowcase dolls ever go missing, I'll have them over here! They are just too precious. Thanks for the tour.

You have given me an idea that Rich may not like.... a closet! Oh to have a space of my own. It's really VERY tempting! I don't think it would go over very well with the buyers though. Spoil sports! LOL

I seriously like how you did this. Although I hate my sewing machine, so it's in the basement and I am soooooo not making a space of it's very own, because it was mean to me and wouldn't work. No fault of my own of course ;)

Those dolls are amazing! How wonderful to have something made by both your grandmother and greatgrandmother!
Thanks for the tour.

I am impressed with what you have done Tina - am anxious to see the final debut.

Enjoyed the tour of your very inspiring and creative space. You have everything well organized and easy to gather. What a wonderful job of making an inviting space. I would be so happy there.
Happy Creating.
Celestina
la rea rose

Hi Tina, I loved seeing how your room came about!!! And you will so enjoy that nice big surface to put your sewing machine on!...And yes, you need to learn to sew...you will be so happy you did! Your room is looking terrific!...I so enjoy when someone takes a space & makes it their own!!! And you have done just that!....heidi XO

Tina, It's me again...I forgot! What a darling opening photograph you have!...I need that pincushion! :)....Heidi XO

What a cute space! I bet you will have many happy & creative hours here! As other have mentioned, please keep us posted on the final outcome! Thanks for sharing with us! I have enjoyed visiting! Patti

How neat that you carved (almost literally) out a spot for yourself! Its amazing what you can cram in one closet! Thank you for sharing!

Very neat and organized. Lovely room to craft in. Lucky you.

What a beautiful, pleasant space. The dolls fascinate me-- thank you for telling about them. How lovely that your computers are networked, sigh. :) Thanks for sharing.

Tina,
I love the makeover on your room! You are so lucky to have your own space..

Love to you-
Esther

My oh my, this project was alot of work for you~I'm exhausted just reading what all you did to change this room. LOL

It turned out heavenly though, and I know you must be so very proud of it. Alot of work, but it does look fantastic.

Love your little blogging/sewing room. Looks like your really have done lots of work. Very creative use and nice that DH has been so helpful and supportive.

You don't want to see my blogging area or my sewing room. Both are a mess. Too much stuff. Try cleaning and organizing, but something always gets in the way. Then it takes me a while to get back to it. Also takes away from stitch time.